Our Gang, Remembering Those Around Us.
By Daniel Shultz 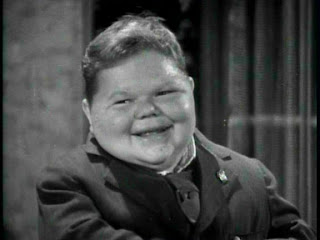 Norman Chaney, better known as Chubby a member of the Little Rascals’ Our Gang film shorts, died in 1936 at the age of 21 due to complications from surgery to correct the glandular ailment that caused his trademark childhood obesity. Before the surgery he had weighed over 300 lbs. while only growing to be 4’7” tall. For over 76 years Norman’s grave remained unmarked. Despite appearing in 19 Our Gang shorts Norman was paid relatively very little for his contributions to the film world and when he died his mother was too poor to afford to buy a headstone. 76 years later an online fundraising campaign purchased two headstones, one for Norman and one for his mother.
This sad story ultimately has a satisfactory conclusion, but it isn’t hard to see that those who profited off of Norman and the other child actors of his day should have done something to honor him. The “Our Gang” shorts didn’t stop filming until 1944, after Norman had died and were helmed by the same man during their entire production.

The lesson to learn from this is fairly simple, as we go through our daily lives as Christians we should recognize the people around us not just for the things they do that benefit us but we should respect them as fellow humans in need of Jesus Christ and the redemption and forgiveness he offers.
People hurt and they have needs and when we are in a position to help we should. I’m not advocating a social gospel but what I am advocating is life led serving others. Jesus was the great servant on earth; He lived his life in complete submission to God and as a servant to the unworthy sinners that surrounded him. Despite being God, Jesus condescended and came down to serve and ultimately save mankind.
We need to emulate that level of love. While we can’t save those around us, only Christ can, we can serve our neighbor and try to live up to the example that Jesus gave us. Jesus not only saved us but also taught us how we should act.
34 But when the Pharisees heard that he had silenced the Sadducees, they gathered together. 35 And one of them, a lawyer, asked him a question to test him. 36 “Teacher, which is the great commandment in the Law?” 37 And he said to him, “You shall love the Lord your God with all your heart and with all your soul and with all your mind. 38 This is the great and first commandment. 39 And a second is like it: You shall love your neighbor as yourself. 40 On these two commandments depend all the Law and the Prophets.”
Jesus summed the entirety of the moral Law of God in these two commandments. The first commandment, Loving God, is impossible without the saving work of Jesus Christ on the cross intervening on our behalf. Through Jesus’s vicarious death and resurrection he has given us the right to be children of God, and as those children of God we are commanded to love our neighbors as ourselves. This isn’t just a feel good saying, or some philosophical “golden rule” it is a command given to us by God.
But what does it mean to love someone as you love yourself. Humans by their sin natures are prone to live a selfish self-fulfilling kind of life. In the bulk of our lives we act in selfish ways to give our lives some sense of happiness or temporal joy. As Christians we are called to turn away from that selfish self-fulfillment to a life of treating others better than we treat ourselves. That isn’t to say that we punish ourselves, but instead we take care of our needs while also looking to see that we love others in a way that honors God. When we have been blessed with earthly comfort or providence we should look to do what good we can to help those less fortunate around us.
The people who used and then forgot about Norman Chaney were not showing the kind of servant love that Jesus called us to. We should strive to act differently. Having been saved from our sins we have been set free to do good works, and those good works should be directed toward our neighbors.
Posted by flyfoxpro at 8:53 AM