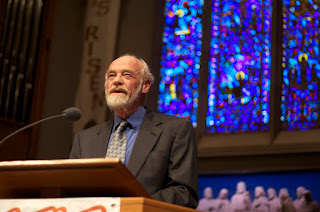 Eugene Peterson, the author of the message bible paraphrase, died of congestive heart failure at the age of 85. Peterson had served as pastor in the Presbyterian Church of the United States of America and was most famous for his Message paraphrase which although popular became controversial due to what some claimed went beyond a paraphrase to mishandling of God’s word.

Peterson was most recently in the news due to a 2017 interview with Journalist Jonathon Merritt, in which he said that if he were asked to conduct a same sex wedding he would perform the ceremony. Although Peterson later retracted that statement and said that he would not conduct such a wedding for many of his critics the initial statement had seemingly confirmed what they had already thought of him.

The life and death of Eugene Peterson should cause us to think hard about the type of person we are as a Christian. Are we handling God’s word correctly? Are we teaching the Bible as it actually is, or are we reading our own thoughts into the Bible? We should also take care to remember that it is God who has the right to judge man, it is God alone who determines the righteous from the guilty.